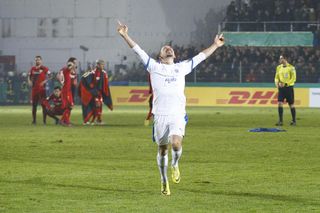 Bayer Leverkusen were the victims of a DFB-Pokal second-round giant-killing as they slumped to a shock 4-3 penalty shoot-out defeat to 10-man Sportfreunde Lotte.

Without head coach Roger Schmidt, banned for two games after the comments made to Hoffenheim boss Julian Nagelsmann, Leverkusen took the lead 25 minutes into Tuesday's contest through Kevin Volland.

However, Roberto Hilbert's own goal early in the second half pulled third-tier Lotte level, and though Volland doubled his and Leverkusen's tally in extra time, the hosts - reduced to 10 men following Tim Wendel's second booking in the 78th minute - again equalised through Kevin Freiberger.

But despite their numerical disadvantage, Lotte, newcomers to the 3. Liga for 2016-17, held their nerve before sealing a fairytale victory from the penalty spot.