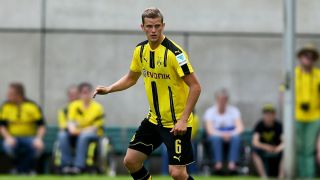 Bender joined Dortmund from 1860 Munich in 2009 and made 224 appearances for the club, winning the Bundesliga and DFB Pokal twice.

The 28-year-old has been capped seven times by Germany and will move to Leverkusen on a four-year contract in a deal worth a reported €15million.

"A few days ago, I approached Aki Watzke and Michael Zorc with a personal request to take a new challenge after eight years at BVB," he told Dortmund's official website.

"As a little boy, I always wanted to be on the pitch. Also due to injuries, I have unfortunately unfortunately not been able to be used by BVB regularly.

"I am very grateful that Borussia Dortmund has respected my will, despite their unconditional desire to keep me. I feel that as a great appreciation."

Watzke added: "We would have liked to see Sven Bender still in our team. On the other hand, he is a player who, like a few others with great achievements, has given a lot of himself to BVB.

"These merits naturally require us to listen more closely and respect his personal desire."

Leverkusen begin their domestic season with a trip to Karlsruhe in the DFB Pokal before opening the Bundesliga campaign away to reigning champions Bayern Munich.

Bender's first reunion with Dortmund will come in December when Peter Bosz's side travel to the BayArena.

In a statement on Leverkusen's website, sporting director Rudi Voller said: "He is an extraordinarily experienced and versatile player who has proved his class in Dortmund. His quality and leadership will be good for our young team. "