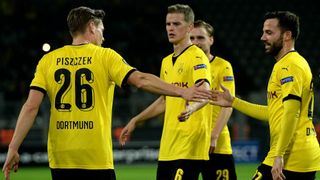 Sven Bender admits another Borussia Dortmund defeat "would have been tough to swallow" and was relieved with the 4-1 Bundesliga victory over Stuttgart on Sunday.

Thomas Tuchel's side were beaten 3-1 by Hamburg last Friday before slipping to a 1-0 defeat in this week's Europa League trip to face FC Krasnodar.

Dortmund responded in style to those back-to-back losses, however, with Pierre-Emerick Aubameyang scoring twice in an emphatic win against Stuttgart at Signal Iduna Park and Bender feels the result was hugely important.

"Three defeats in a row would have been a tough one to swallow, so it's good we won," he told Sky.

"We had a few problems after going 2-0 up. Stuttgart switched the play forward extremely quickly. We had to be on our toes for the whole 90 minutes."

Gonzalo Castro opened the scoring before setting up Aubameyang for Dortmund's second and the 28-year-old believes he is now repaying Tuchel's faith with his performances.

"It was a good performance by us. I am delighted that we showed such fighting spirit to win a difficult match," Castro said.

"We played too slowly after we took a 2-0 lead. In the second half we were clearly the dominant force in the match. I'm now paying back the trust that the coach shows in me."