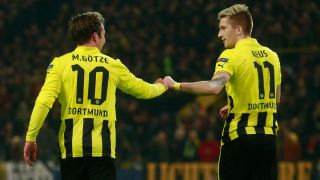 Marco Reus and Mario Gotze found the net as Borussia Dortmund cruised to a resounding 6-1 friendly romp over third-tier Paderborn on Tuesday.

It has been a productive mid-season break for Thomas Tuchel's side, who have also enjoyed comfortable wins over PSV and Standard Liege before a return to Bundesliga action at Werder Bremen on Saturday.

The only sour note of Tuesday's victory was an injury to Sven Bender, who had to limp off after 19 minutes with an apparent ankle problem following a heavy challenge from Sven Michel.

Dortmund shrugged off that early setback and took the lead midway through the half as Gotze fed Gonzalo Castro, who took the ball in his stride, stepped away from a defender and poked home.

Paderborn were level within six minutes as a poor header from Lukasz Piszczek allowed Thomas Bertels to nip in and punish the defender.

Reus restored Dortmund's lead from Marcel Schmelzer's cut-back before the break, and it was 3-1 just after the hour as Gotze rolled his defender and produced an emphatic finish in off the crossbar.