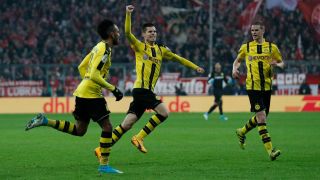 Sven Bender insists his amazing goalline clearance in Borussia Dortmund's DFB-Pokal win over Bayern Munich had an element of luck.

Goals from Javi Martinez and Mats Hummels had given Bayern a 2-1 lead at the Allianz Arena when striker Robert Lewandowski squared the ball to Arjen Robben in the 65th minute.

The Dutch winger looked certain to score but Bender somehow stretched out his leg to deflect the shot on to the post, which proved a turning point as Pierre-Emerick Aubameyang levelled before Ousmane Dembele smashed home the winner.

Dortmund's victory over the Bundesliga leaders set up a final against Eintracht Frankfurt on May 27, but Bender played down the role of his clearance in his side's victory.

"I didn't get a good look," Bender told the DFB's official website. "I went back behind [goalkeeper] Roman Burki since I saw that he was standing slightly out of his goal.

"I took a gamble that Arjen Robben would go for the corner. After that I lost my view of it though because I had no idea where the ball then went to. I just heard the post, then looked and saw that the ball hadn't gone in. That is exactly the kind of luck you need in a cup game.

"That would have made it 3-1 to Bayern which would have made things very difficult. I'm glad it played out that way and I'm pleased I was able to stretch my foot out a little further than I usually would."

Dortmund will contest the DFB-Pokal final for the fourth year in succession and Bender believes his side will lift the trophy after losing three in a row.

"We put so much into that game," Bender added. "Of course we got lucky at times but that's what the cup is all about. At the end of the day we're delighted to have won and be heading back to Berlin for the final.

"I think it's our turn this year. We've got a fantastic group and we demonstrated that again in the semi-final. We have a lot of quality, a brilliant mentality and we've definitely got a lot of experience of playing in the final.

"We need to make sure we exploit that experience so that we can finally lift that trophy again."