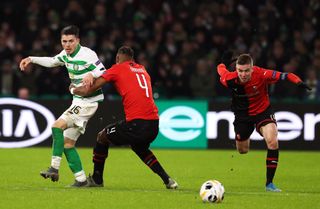 Stand-in centre forward Lewis Morgan was delighted to help Celtic achieve some club history in the Europa League with the opening goal in the 3-1 win over Rennes at Parkhead on Thursday night.

The Hoops had already qualified for the last-32 but boss Neil Lennon was desperate to win in order for the club to top a group in the league for the first time, to ensure the possibility of a more favourable draw.

Morgan, usually a winger, replaced injured French striker Odsonne Edouard and opened the scoring with a confident finish in the 22nd minute for his second goal in green and white.

Attacker Ryan Christie doubled that lead just before the interval.

Second-half substitute Mikey Johnston added a third before Rennes substitute Adrien Hunou headed in a late consolation for the visitors.

Lennon’s side moved on to 13 points – the first time they have broken the 10-point barrier – and with Cluj losing 1-0 to Lazio in Rome, the Hoops’ pole position is guaranteed before they travel to Romania next month for the final Group E fixture.

“It’s a new position I have been working on in training for a month or so,” Morgan told Celtic TV.

“Obviously my chance came about through Odsonne getting injured and I just about took that chance.

“We still have a game left and hopefully we can add more to that.”

Johnston was delighted to be back for the first time since September following injury and glad to be on the scoresheet.

“To come back and get the goal will give me that confidence and belief again as it is very hard being injured.

“I am just delighted.

“I think this squad is special as the manager said.

“We have been getting unbelievable results. Lazio are third in Serie A and we beat them home and away so we have a lot of quality in the group and a lot to give.”