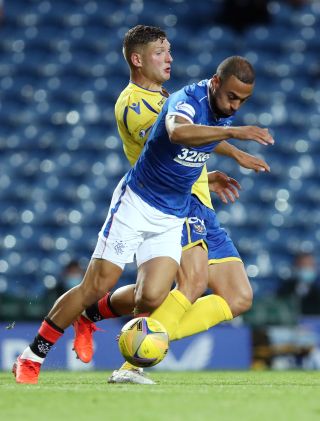 St Johnstone defender Liam Gordon is desperate for Sunday’s game against Hibernian to come around after crashing down to earth from the highs of Rugby Park.

Gordon and his team-mates celebrated in style on Saturday as Michael O’Halloran earned them a first win of the Scottish Premiership season with a winner at Kilmarnock deep into stoppage-time.

But the centre-back suffered a late blow on Thursday as Ryan Hedges’ shot deflected in off his heel to hand Aberdeen a 1-0 victory in Perth.

Gordon said: “Losing the game was a bitter pill for all the boys to swallow but we have a game on Sunday so we just need to focus on that now.

“When you look at the previous game, we had the highs of football and now we are facing the lows. It’s just about dusting ourselves down and focusing on Sunday and hopefully getting a positive result.”

Saints were denied a first clean sheet of the season following Hedges’ winner but Gordon is confident they can nullify the attacking threats of second-placed Hibs, who have had wingers Martin Boyle and Daryl Horgan and strikers Christian Doidge and Kevin Nisbet weighing in with goals and assists.

“There’s a lot of teams in the league that have good attacking options,” Gordon said.

“You could say Aberdeen have a lot of good attacking options and I thought we dealt with them well.

“We played Hibs pre-season and came up against all those players, their new players too, so we know what they are about.

“Hopefully we can handle them on Sunday and get a good result.”