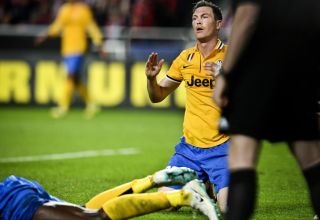 A 2-1 loss in Portugal in the first leg has left the Serie A leaders, favourites to win the tournament, staring at a semi-final exit.

Lichtsteiner said Antonio Conte's men were wary of the counter-attacking ability of the Primeira Liga champions, but insisted they are optimistic heading into Thursday's home clash.

"Our second-half performance in Lisbon gives us optimism for the Europa League, though we did concede two stupid goals that we avoidable, as we weren't focused enough," Lichtsteiner told Sky Sport Italia.

"The important thing will be avoiding counter-attacks, as Benfica are truly dangerous on those. We need to be more concentrated."

Tevez has scored 19 league goals this season but is unlikely to be selected for Argentina, while Llorente (15 goals) is fighting for a place in Spain's squad.

"I get along well with Llorente. It'd be a real shame if he and Carlos Tevez didn't go to the World Cup, as they are top players," Lichtsteiner said.

"I hope to the end that they can get the call."