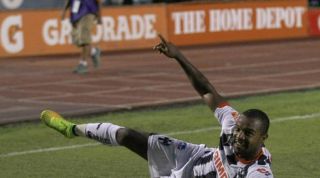 Michael Arroyo helped America to a third straight win with a fine finish in midweek, and the Ecuador international will now strive to fire the Azteca giants to a first win in five years at the Estadio Azul.

"We know we are expected to reach the play-offs, to be the [title] favourites," said America midfielder Osvaldo Martinez. "But we can't relax. We want to make sure of our qualification as soon as possible."

Second-placed Monterrey will look to move onto the verge of a play-off spot at home to Tijuana.

"The results have given us peace of mind and confidence, but we are still working to improve some things," he said. "We want to play with greater intensity. We need more balance at times.

"But we won't change what is working for us. We are very solid defensively, we work hard and are very committed."

Monterrey have only won one of their last seven encounters with Tijuana.

Queretaro dropped into the final play-off qualification place by recently losing at Atlas, though Ronaldinho still seized the majority of the headlines due to scoring a sumptuous free-kick and autographing a pitch invader’s shirt.

Next up for the Brazilian legend and thriving compatriot Camilo is the visit of lowly Leon.

Santos Laguna, in seventh but having collected just one point from a possible nine, will expect to return to winning ways at home to rock-bottom Morelia, while fifth-placed Tigres visit Veracuz.

Atlas and Toluca will attempt to strengthen their grips on play-off places against respective strugglers Guadalajara and Puebla.