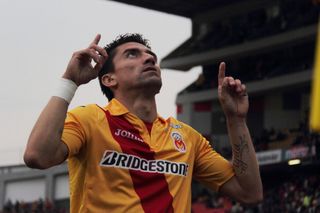 Monterrey will head to Morelia's Estadio Generalisimo Jose Maria Morelos y Pavon with just one win in their past four matches in Liga MX - a 1-0 triumph over Pachuca in their last start - which should give the home side plenty of hope of ending their hoodoo.

Morelia have only one Mexican league title to their name but lead the 2013-14 campaign heading into this weekend's action.

The club based about 300 kilometres west of Mexico City have picked up 20 points from 10 matches this season, while second-placed America sit on 19 but have two games in hand on the league-leaders.

Chilean striker Hector Mancilla will be the key for Morelia as he leads the goal-scoring table with seven, alongside Veracruz's Angel Reyna.

Morelia have won just one of their past 11 meetings with Monterrey, with the three-time CONCACAF Champions League winners having claimed the last contest between the two teams in January.

Argentine midfielder Neri Cardozo scored the decisive goal in Monterrey's 1-0 win on that occasion, while Mancilla was sent off just before half-time.

Monterrey will enter the match in 13th position on the table with just 10 points from as many games.

If Morelia fail to knock off Monterrey, America can regain top spot if they win at home over Chiapas in what could be the match of the weekend.

America lost 2-1 away to Santos Laguna last week, which ended an eight-game unbeaten streak in the Mexican top flight for the capital-based club.

Chiapas have won their past three fixtures and sit just two points behind America in fifth spot on the table.

Leon, who sit third on 19 points from 10 matches, behind America due to goal difference, will host Guadalajara, while fourth-placed Queretaro face Toluca.

Tijuana will host Cruz Azul, Tigres UANL are set to take on Puebla and Atlante will welcome Pumas UNAM to Benito Juarez.

In other matches, Pachuca will play Santos Laguna and Atlas will host Veracruz.