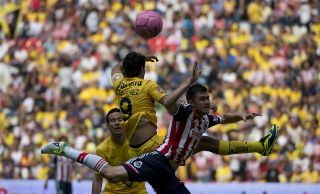 After a goalless first half, America – who entered the match on the back of three successive league wins – finally broke the deadlock in the 69th minute.

Raul Jimenez was the man responsible for breaking the deadlock and just two minutes later they sealed their victory.

Colombian Luis Rey's first goal in almost a month broke the spirit of the struggling Guadalajara, who have won just once this season.

The result kept the chasing pack at bay, despite the second-placed Leon also enjoying a home win, 3-1 over Puebla.

Rafael Marquez gave Leon the lead from the penalty spot after 16 minutes, but the ex-Barcelona man was then dismissed 12 minutes later.

An intriguing finale looked in store when Matias Alustiza levelled proceedings with a penalty of his own shortly after, but the 10 men of Leon fought strongly in the second half.

And goals to Luis Montes and Mauro Boselli, in the 53rd and the 56th minute respectively, ensured they would win again.

Other results saw rock-bottom Pumas UNAM fall to a 1-0 home defeat to Santos Laguna while fellow strugglers Atlante posted a 2-1 success against Monterrey.

Morelia and Tijuana recorded 2-1 and 1-0 home wins over Chiapas and Queretaro respectively, Pachuca and Veracruz played out a 1-1 draw and Cruz Azul notched a 2-1 triumph over Atlas to climb to sixth.