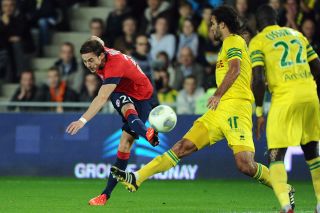 Rene Girard's men went into the game knowing victory would take them above Monaco ahead of their clash with Lyon on Sunday.

And they did not disappoint as Roux struck the only goal of the game four minutes before half-time to hand the hosts their first defeat in five games.

Defender Papy Djilobodji was sent off late on for Nantes, who missed the chance to leapfrog their opponents and move into third place.

Ronny Rodelin was the provider for Roux, who acrobatically turned home the attacker's right-wing cross to net only his second goal of the campaign.

The 25-year-old should have doubled Lille's advantage in the early stages of the second half, but sent his shot wide of the right-hand post after being put through by Rodelin.

Both sides traded chances as the contest drew towards its conclusion, the unmarked Salomon Kalou heading straight at Remy Riou, before Lille goalkeeper Vincent Enyeama denied Venezuelan forward Fernando Aristeguieta at the other end.

Nantes' chances of snatching an equaliser were dealt a blow seven minutes from time as Senegalese Djilobodji was dismissed for a second bookable offence.

The Breton club continued to push forward despite their numerical disadvantage, but could not break down the Lille defence, who kept a clean sheet for the ninth time this term.