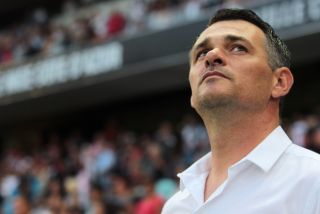 Willy Sagnol's side made it three victories from three last Saturday with a 3-1 success at Nice that came courtesy of coming from behind for the second consecutive game.

After falling a goal down early on, Bordeaux bounced back thanks to Cheick Diabate's second of the new season before Nicolas Maurice-Belay and Gregory Sertic got their names on the scoresheet.

Early pacesetters Bordeaux next face a Bastia side that has won, drawn and lost in their three outings, but will be on a high after picking up their first league victory of 2014-15 last time out.

Like Bordeaux, Saint Etienne are also yet to taste defeat this term, conceding just once, although their winning start was ended last Sunday with the goalless draw with Rennes.

Laurent Blanc's PSG side have made a stuttering start to their title defence and go into the clash without Yohan Cabaye, who was sent off in the 0-0 draw with Evian last Friday.

This adds to doubts over the fitness of Zlatan Ibrahimovic (rib), Thiago Motta (nose), Gregory van der Wiel (back) and Thiago Silva (hamstring).

Lille sit third as the final undefeated side left in the league and are the only team yet to concede. A trip to Monaco awaits on Saturday.

Caen are the early surprise package and they host Rennes, while 2011-12 champions Montpellier sit one place back also on six points as they head to Nantes.

Elsewhere, Evian remain bottom and have conceded nine goals already, but they kept their first clean sheet of the season in the draw with PSG, which will put them in good spirits for the visit to Toulouse.

Metz and Reims are both hoping to notch their first wins of the season when they take on Lyon and Lens respectively, while Lorient host Guingamp.