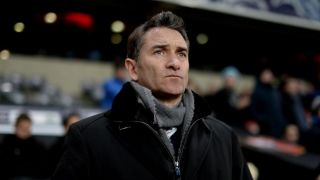 A superb run of form saw Rennes go unbeaten in the league from October 4 until a 4-0 reverse at home to Montpellier on December 6.

That setback started a six-match winless league run and has seen Rennes slip to 10th in the table.

A trip to the Parc des Princes to play champions PSG poses another daunting challenge for out-of-sorts Rennes, particularly considering Laurent Blanc's men have not been beaten on home soil this term.

However, Rennes have reason to be cautiously optimistic ahead of a trip to the French capital having won one their past two visits to PSG.

Rennes' 2-1 victory in November 2012 was particularly impressive as they were reduced to nine men after 52 minutes.

Having prevailed by the same scoreline last May, head coach Montanier is hopeful of a third straight triumph at the division's third-placed side.

"We are cautious on the stats of the past, but Rennes have managed several exploits in Paris in the past. Why not again?" he told the club's official website.

"It is one of the biggest challenges of the year because they are still unbeaten at home this season.

"They won their last match at home with difficulty, but still with a score of 4-2 against Evian.

"If everyone is not at their best level, we cannot get a good result in Paris."

By their own lofty standards, PSG have endured an inconsistent campaign and are four points adrift of leaders Lyon.

A return of eight draws - including a 1-1 result in the reverse fixture with Rennes in September - has been part of PSG's trouble this term.

Back-to-back wins have put PSG back on track, though, and perhaps more importantly last weekend's 1-0 win at Saint-Etienne saw star striker Zlatan Ibrahimovic return to the scoresheet in Ligue 1.

The Sweden international had gone four top-flight matches without a goal, but he kept his nerve to score from the spot on the hour mark at the Stade Geoffroy Guichard.

Blanc, whose position has come under some scrutiny this term, was happy with the win at Saint-Etienne, but also recognised the difficulty posed by Rennes.

In the aftermath of the Saint-Etienne win, he said: "We needed to take three points away from home at Saint-Etienne and I guarantee you there'll be pressure next Friday against Rennes too."