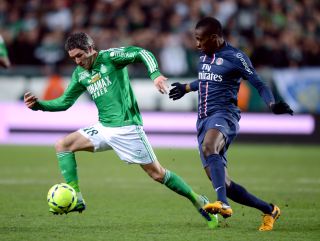 PSG have not tasted defeat in any competition in their last 20 matches, and sit top of Ligue 1 following their 4-0 demolition of Bastia last weekend.

Laurent Blanc's men backed up that success with a 5-0 rout of Anderlecht in the UEFA Champions League, Sweden international Zlatan Ibrahimovic scoring four times against the Belgian champions.

Ibrahimovic and strike partner Edinson Cavani have scored 19 goals between them so far this season, and they should be confident of adding to that tally against a side that has won just one of its last five.

However, Saint-Etienne took four points off PSG last campaign, winning 2-1 at the Parc des Princes before holding the capital club to a 2-2 draw at the Stade Geoffroy Guichard.

The champions will be seeking revenge for their loss in 2012-13, but will have to do it without captain Thiago Silva, who is still recovering from a thigh injury.

However, Blanc will be able to call on the midfield pairing of Marco Verratti and Thiago Motta, who are set to return from domestic suspension.

Saint-Etienne have not beaten PSG at home in the league since 2008, when they claimed 1-0 victory.

And Christophe Galtier's side will attempt to end that run without a number of key players, with striker Mevlut Erding and experienced defender Jonathan Brison both on the injury list.

The hosts are among the top scorers in Ligue 1, with only PSG and Monaco scoring more so far this term.

Striker Brandao returned to action last weekend in Saint-Etienne's 3-2 win over Lorient, the Brazilian striker making his first league appearance since their season-opening win over Ajaccio.

Brandao scored 14 goals for Saint-Etienne in all competitions last campaign, and the hosts will likely need him to to rediscover that form if they are to finally end PSG's unbeaten streak.