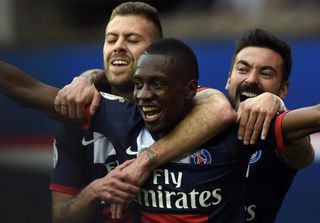 Laurent Blanc's men now hold a 10-point lead over second-placed Monaco with four games remaining, and will be assured of a second consecutive title with victory over Sochaux on Sunday - although they would be crowned champions sooner should Monaco lose at Ajaccio on Saturday.

PSG headed into the match buoyed by winning the Coupe de la Ligue last Saturday, yet the Parisians produced an underwhelming first-half showing and could have been behind had Daniel Bass' early free-kick not rebounded off the crossbar.

The hosts improved after the interval and Ezequiel Lavezzi missed a gilt-edged opportunity to break the deadlock when he side-footed wide from close range.

PSG were dominant after Evian's Kassim Abdallah was shown a red card with 30 minutes remaining, and finally made their numerical advantage count with just one minute of normal play remaining to put them another step close to the title.

PSG typically looked to control possession from the off, but it was the visitors who almost opened the scoring in the fifth minute when Wass' 30-yard free-kick crashed against the bar.

The game’s next chance also fell to Wass, the Denmark international rising highest to head Cedric Barbosa's corner goalwards only to be denied by Salvatore Sirigu's fine save.

Having survived those scares, the hosts created their first meaningful opportunity on 22 minutes.

Marco Verratti pinched the ball deep in Evian's half before slipping a neat throughball into the path of Lavezzi, only for the Argentine forward to be denied by the quick thinking of Evian keeper Hansen, who saved with his foot.

Adrien Rabiot then flashed an effort over the bar from the edge of the box, but PSG remained frustrated in their hunt for the opener.

The home side upped the tempo after the break, and Lavezzi really should have broken the deadlock after 58 minutes.

Javier Pastore's cute pass into the box was met by Rabiot, who in turn laid a teasing ball across goal from the left to the former Napoli man, who side-footed wide of the far post from six yards.

Evian were dealt a blow on the hour mark as Abdallah - who had only been booked five minutes earlier - was sent off for a second bookable offence for scything down Lucas Digne.

PSG then began to control proceedings and Lavezzi's dipping effort from 30 yards was tipped over by Hansen.

Blanc's side wasted a golden opportunity with 10 minutes left as the ball fell kindly to Matuidi near the penalty spot, but he flashed wide.

However, the France international made amends shortly after as he collected fellow substitute Lucas' throughball and sent the home fans into delirium.