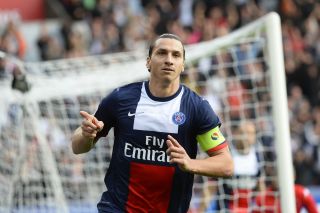 Ibrahimovic struck a first-half double – including an outrageous acrobatic effort in the 10th minute – with Cavani added a double of his own having replaced the Sweden international.

Cavani's first was a superb solo effort just after the hour, and he doubled his tally with a late penalty after Lucas Digne had been brought down.

Laurent Blanc made six changes from the side that beat Marseille before the international break, with Cavani benched, perhaps with Wednesday’s UEFA Champions League clash against Anderlecht in mind.

Bastia – who made one change from their previous fixture - appeared to have settled well, however two goals in three minutes put the hosts in complete control.

With 10 minutes played, Hervin Ongenda flicked a cross from the right into the air, and Ibrahimovic sensationally reached behind him to fire the ball into the net off his heel.

Three minutes later, the striker doubled his tally with a simple header from a Lucas Moura free-kick. Ibrahimovic drifted away from his marker and had the easy task of heading past Mickael Landreau from five yards out.

Adrien Rabiot had a great opportunity to make it three for PSG, however his shot from long range went straight at Landreau.

Wahbi Khazri created the visitors’ best chance of the half in the 27th minute as he delivered a perfect cross for Gianni Bruno, however the striker placed his header over the crossbar.

Ibrahimovic was replaced by Cavani at the break, and he almost added PSG’s third eight minutes after coming on.

He peeled away from his marker to meet an Ongenda cross from the left, but headed over the bar from six yards out.

The visitors were slowly began to come back into the game and Boudebouz went close to halving the deficit, however Cavani extended PSG’s lead with a solo strike in the 63rd minute.

The Uruguayan received a pass from Jeremy Menez on the left, cut into the penalty area – leaving two defenders on the floor – before going round the goalkeeper and rolling the ball into the net from a tight angle.

Bastia nearly gifted the 26-year-old a second - and PSG a fourth - in the 76th minute as some slack defending from Landreau's goal kick saw Cavani one-on-one with the goalkeeper.

He was unable to convert that chance but with three minutes to play the hosts were awarded a penalty for a foul on Digne by Landreau.

Cavani cooly converted the penalty to secure a comfortable win for the reigning champions.