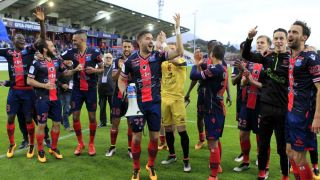 Gazelec Ajaccio gave their Ligue 1 survival hopes a huge boost on Sunday with a 3-2 home win over Corsican rivals Bastia that lifted them out of the relegation zone.

Trailing to Axel Ngando's early opener for the visitors, Gazelec were ahead by half-time thanks to Khalid Boutaib and Gregory Pujol.

Mohamed Larbi's penalty shortly after the hour extended the lead, and although Yannick Cahuzac pulled one back for Bastia with 14 minutes to go, Gazelec held on and jumped above Reims into 17th place.

Marseille are one place and four points better off after their 1-1 draw at home to Nantes.

The games between Guingamp and Caen, and Rennes and Monaco also finished 1-1.

Saint-Etienne's push for Champions League qualification continued as they secured a 2-0 home win over Lorient courtesy of two goals in the final 15 minutes from Nolan Roux.