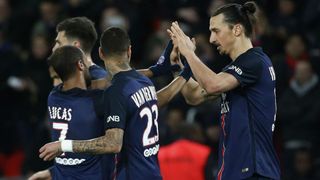 Paris Saint-Germain took another step towards retaining their Ligue 1 title with a 4-1 home win against Reims on Saturday.

Gregory van der Wiel, playing at right-back in place of the disgraced Serge Aurier, put PSG into an early lead at the Parc des Princes, but Reims managed to hit back through Prince Oniangue.

However, Zlatan Ibrahimovic and Edinson Cavani struck just before half-time to put PSG firmly in control, and Ibrahimovic wrapped up the victory in the second half with his 23rd league goal of the season.

Laurent Blanc's men remain unbeaten in Ligue 1 this season and hold a 24-point gap over second-place Monaco as they continue to close in on a fourth successive league title.

Monaco were able to tighten their grip on second with a 3-1 home win against Ligue 1's bottom club Troyes, Guido Carrillo scoring a brace in the first half.

The best game of the day came at the Stade du Moustoir, where Lorient edged a seven-goal thriller against Guingamp thanks to a 93rd-minute strike by Raphael Guerreiro.

Gazelec Ajaccio were on track to climb out of the relegation places with a victory over second-bottom Toulouse but a costly red card to Issiaga Sylla's helped Martin Braithwaite score an injury-time equaliser to make it 1-1, leaving both clubs in the bottom three.

Montpellier put clear distance between themselves and the relegation zone with a 3-2 victory at Angers, who lost their fourth successive league game, with first-half goals from Kevin Berigaud, Mustafa Yatabare and Souleymane Camara setting up the win for the visitors.