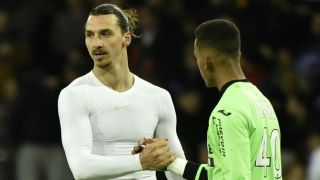 Laurent Blanc's team were made to battle for a victory that extends their advantage at the summit to a remarkable 23 points.

Wissam Ben Yedder hit the crossbar for the hosts during the first half, but PSG stepped things up after the break and Ibrahimovic capitalised on fine work from David Luiz to head home from close range after 73 minutes.

Fourth-placed Monaco can make a slight dent in the leaders' monumental advantage when they travel to Lorient on Sunday, while Rennes are up to fifth after coming from 2-0 down to beat basement boys Troyes 4-2.

Fabien Camus opened the scoring before setting up Corentin Jean in the 15th minute but the hosts would end the day still in possession of their unwanted winless record in Ligue 1.

Fallou Diagne held his nerve to net a pair of penalties either side of an Ousmane Dembele goal to put Rennes ahead at the break and substitute Kamil Grosicki sealed victory nine minutes from time.

Defender Youssouf Sabaly found a stoppage-time equaliser as Nantes pegged back struggling Guingamp to a 2-2 draw, while Gazelec Ajaccio and Reims shared the same score at the Stade Ange Casanova – forward Nicolas de Preville netting a first-half brace for the visitors.

Elsewhere, Bordeaux and Bastia were 1-0 winners at home to Lille and Montpellier respectively.