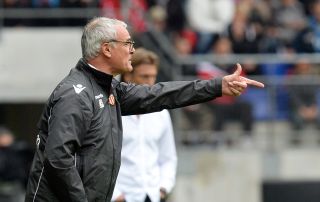 Claudio Ranieri's side went into the match three points behind leaders Paris Saint-Germain after the champions' resounding 4-0 win over Bastia on Saturday, and for a while Monaco looked as though they would also move level on 24 points.

The 20-year-old doubled Monaco's lead five minutes later as he pounced on a loose backpass, but Sochaux fought back after the break, with Cedric Bakambu's 57th -minute header bringing them back into the contest.

Corners were proving to be Monaco's downfall as Joseph Lopy's equaliser also came from a set-piece 12 minutes later, earning Sochaux their sixth point of the season.

Lyon's Ligue 1 woes continued against Bordeaux as Francis Gillot's side travelled to Stade Gerland and held them to a 1-1 draw in Sunday's late kick-off.

The hosts kept Bordeaux at bay for an hour, but in the 62nd minute the visitors took the lead as the unmarked Ludovic Obraniak stroked home Henri Saivet's left-wing cross at the back post.

Lyon's cause was damaged even further five minutes later as Alexandre Lacazette picked up his second yellow card of the match after a late tackle, but Jimmy Briand saved a point for the hosts in stoppage time.

Saint-Etienne are seventh after beating struggling Lorient 3-2 at home.

Brandao and Benjamin Corgnet gave the hosts a two-goal lead within 14 minutes at Stade Geoffroy-Guichard, but Yann Jouffre gave Lorient a lifeline seven minutes before half-time.

Max Gradel restored the hosts' two-goal lead in the 72nd minute, with Yohan Mollo grabbing the assist, and although Vincent Aboubakar pulled another goal back for the visitors, Saint-Etienne claimed the three points.