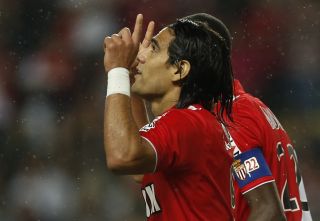 Claudio Ranieri’s men remain top of the division with the home victory as Radamel Falcao netted in either half, to take his tally to seven in as many games, and follow-up Emmanuel Riviere’s early effort.

The impressive result follows up Sunday's 1-1 draw with title holders Paris Saint-Germain, and Laurent Blanc’s men also emerged victorious from their encounter with Valenciennes to keep the pressure on.

That fixture saw the home side fall to their sixth league defeat in a row as Edinson Cavani found the back of the net in the dying seconds of the first half to seal a 1-0 victory.

With Monaco streaking ahead in the table, a number of teams further down dropped further back, as seventh and eighth-placed Nice and Lyon fell to defeats against Nantes and Ajaccio respectively.

Lyon, who ran out 3-1 victors over Nantes on Sunday, were unable to keep out their hosts as Aboubacar Camara scored his first career goal to cancel out Steed Malbranque’s equaliser to see a final score of 2-1.

Nice, on the other hand, failed to even get off their mark when they visited Michel Der Zakarian’s side with goals from Filip Djordjevic and Fernando Aristeguieta seeing the hosts grab a 2-0 triumph.

There was also disappointment for early strugglers Sochaux and Bordeaux who failed to pick up three points from their encounters with Guingamp and Reims.

And while Bordeaux drew 0-0 , Sochaux slipped to their third league loss in a row as Guingamp thrashed them 5-1 with five goals from as many players as Cedric Bakambu’s effort barely served as a consolation.

Toulouse sealed a positive result though, as Alain Casanova’s team sealed a 1-0 win over Lorient with 22-year-old Martin Braithwaite netting his third goal of the new campaign.