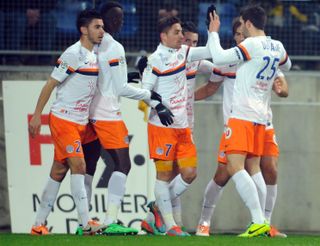 Anthony Mounier's left-footed strike in the 19th minute put Rolland Courbis' men in the ascendancy, before Nathan Sinkala was given his marching orders for a second bookable offence 16 minutes later.

A second goal from Souleymane Camara wrapped up the side's first league victory under Courbis, sending them 16th in the league.

Ajaccio's slide towards relegation continued as they fell to a fifth straight defeat against Nice.

The French top flight's basement club, who have not won in the league since their sole victory of the season on September 25, fell behind to a Christian Bruls free-kick from a tight angle in the fifth minute, before Dario Cvitanich made sure of the three points at the death with a close-range finish.

Evian climbed one point further away from the drop zone as they played out a goalless draw at Rennes, who have now gone five matches without a win.

Bordeaux suffered back-to-back defeats for the first time since September in a 1-0 reverse at Bastia.

Adam Ba scored the only goal of the game three minutes before the break as the hosts recorded their first win in six.

Lorient returned to winning ways with a 2-0 victory over Guingamp, lifting them to ninth in the division.

Having lost their first league match in eight last time out, normal service was resumed when Yann Jouffre broke the deadlock in the eighth minute.

Kevin Monnet-Paquet added a second five minutes later to make sure of the three points.

Elsewhere, the early clash between Marseille and Valenciennes was postponed due to a waterlogged pitch.