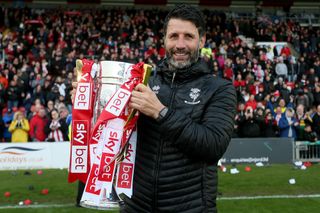 Lincoln boss Danny Cowley will cost West Brom £500,000 if they want to take him to The Hawthorns.

The Imps manager is on Albion’s radar in their hunt for a new head coach following the conclusion of their Sky Bet Championship play-off campaign.

Chris Hughton is also under consideration by the Baggies following his sacking from Brighton this week.

Albion have not made any decision over what direction they will take in their search.

They are eager to give any new manager as much time as possible before the start of pre-season and would prefer to make a quick appointment.

The Cowleys have taken Lincoln from the Vanarama National League to League One in just three years after winning the League Two title this month.

The Imps won the Checkatrade Trophy last year, beating Shrewsbury 1-0 in the final at Wembley.

They also reached an FA Cup quarter-final with the Imps in 2017, becoming the first non-league side to reach the last eight in 103 years, before losing to Arsenal.

Norwich, Nottingham Forest, Barnsley and Southend have all looked at the management duo over the last couple of years.

Albion lost their play-off semi-final 4-3 on penalties to Aston Villa on Tuesday after drawing 2-2 on aggregate.

Caretaker boss Jimmy Shan won seven of his 13 games in charge after replacing the sacked Darren Moore in March.

He has been told there will be a coaching role for him at the club, regardless of who is manager.

Albion finished fourth in the Championship but missed out on an instant return to the Premier League.