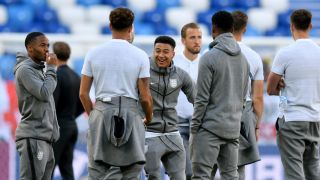 England face Colombia in Moscow on Tuesday, aiming to win a knockout game at a major tournament for the first time since 2006.

Rio Ferdinand, Steven Gerrard and Frank Lampard have all spoken recently of the cliques that became entrenched within the England camp during their era, when players from the Premier League's leading clubs kept one another at arm's length, and quarter-finals at World Cups and European Championships proved an insurmountable hurdle.

Any time spent watching Southgate's squad at close quarters reveals a contrasting camaraderie and Lingard feels this can work in the Three Lions' favour at a World Cup that continues to open up unpredictably.

"We've become like family," he said. "You're going to have to get along with each other when you're around each other this long.

"Everyone gets on. There's no squabbling in the camp, there's no cliques in the camp. I think that's why we've done well.

"For now we're family and we've really got a strong bond at the moment between everyone."

In the type of excursion that was seemingly unlikely during the Sven-Goran Eriksson and Fabio Capello eras, Lingard and Manchester United colleague Marcus Rashford went to a St Petersburg theme park on their Friday afternoon off with Arsenal's Danny Welbeck and Liverpool duo Jordan Henderson and Trent Alexander-Arnold.

"I thought he would be more quiet than he is. He pipes up now and then," Lingard chuckled about teenage full-back Alexander-Arnold, who starred in an Instagram story video of his team-mates making a hasty escape from a rollercoaster because they thought the safety harnesses were faulty.

"I think everyone's happy, everyone has their own banter with each other," he continued.

"I think we've really come together as squad and gelled over the past six weeks."

It is that understanding on the field that will count above and beyond anything else at Spartak Stadium against a talented Colombia side who are waiting on the fitness of star playmaker James Rodriguez.

After the damp squib of a heavily rotated line-up losing 1-0 to Belgium in their final group game, Lingard is confident England have more gears to go through in Russia so long as they have road left to run.

"I think there's another level for us. In training everyone is sharp. Everyone's 100 per cent on it," he added

"When it comes to the games we know we're going to be ready. There probably is another gear we can go to. We'll have to wait and see."