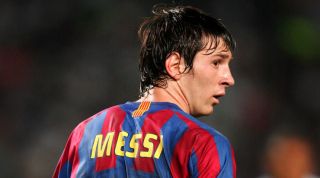 The Gunners made a swoop to pick up 16-year-old midfielder Cesc Fabregas from the Catalan club’s famed La Masia academy in 2003.

Wenger admitted that the Premier League club were keen to sign Argentina's star-in-the-making with former club-mate Fabregas, but he was already considered indispensable by Barça at the time.

“We were in discussions with Barcelona when we bought Fabregas, because Messi played [with him],” Wenger told beIN SPORTS.

“You can realise sometimes what fantastic youth teams you had before when you're a club like Barcelona. In the same team: Messi, [Gerard] Pique and Fabregas.

“Pique and Fabregas came to England, Messi stayed in Spain.

“We were interested in him, but he was untouchable at the time.”