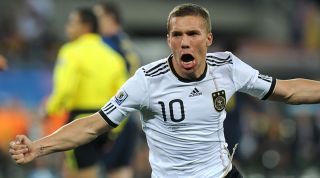 The obvious one. Poldi might not have been a total failure for Bayern Munich and Arsenal – far from it. He's also a local legend at Cologne, the club that nurtured him. And yet, judging by his club career, he most definitely doesn't deserve to be considered one of the best German players in history.

That's not what the stats show, however. The versatile forward won 130 caps for Germany, putting him third in their all-time rankings – just behind Lothar Matthaus and Miroslav Klose. He's also their third-highest scorer behind Klose and Gerd Muller with 49 goals. Poldi was a firm favourite with coach Joachim Low and a big joker in the dressing room, and won the 2014 World Cup without playing in the knockout phase.

World Cup 2018 was Die Mannschaft's first major tournament without Podolski since 2002... and it did not go well.

"I have no idea why I'm playing better for the national team," Vargas once said. He's one of the most popular players in Chile, and has rarely disappointed when putting the red shirt on. The striker was the Copa America's top scorer twice in a row, in 2015 and 2016 – and the Chileans won both tournaments, having failed to do so in their history. Vargas had a solid 2014 World Cup too, scoring in a crucial 2-0 win over Spain.

Overall, he has 38 goals in 90 international fixtures, but his club career in Europe was a disaster. The Chilean failed miserably at Napoli, Valencia, QPR and Hoffenheim, winning few admirers in Italy, Spain, England and Germany. He now plays for Tigres in Mexico and is unlikely to return to Europe.

Charisteas will be remembered as a Greek legend for generations to come, having scored the winning goal against Portugal in the Euro 2014 Final. The burly striker netted the winner against France in the quarter-finals, and was on target against Spain too, earning his place in history.

With 25 goals for his country, he is Greece's second-top scorer of all time – and only four of those strikes came in friendlies. Charisteas was always reliable for the national team but never managed to convince at his clubs. In fact, he only netted nine times in his best season for Werder Bremen in 2002/03. Things got worse later on, and the Greek endured disappointing spells at Ajax, Feyenoord, Nuremberg, Bayer Leverkusen and Schalke – not to mention a short and bizarre adventure at French side Arles-Avignon.

Ask any Croatian football fan, and they will tell you how great Asanovic was. This elegant midfielder was at the very heart of everything the national team did in the late '90s: his passing was immaculate, and he made the team tick when they reached the quarter-finals at Euro '96 and then finished third at  France '98.

Asanovic didn't feel inferior to star players Zvonimir Boban, Robert Prosinecki, Alen Boksic, Davor Suker and Robert Jarni – and rightly so. Mention his name to your average fan outside of Croatia, however, and you're likely to get nothing more than a confused shrug. He only fulfilled a fraction of his potential in a club career with the likes of Montpellier, Derby, Napoli and Panathinaikos (among others)– and that's a great shame.

Grosso's celebration after scoring a 119th-minute winner against Germany in the 2006 World Cup semi-finals won't be forgotten easily. The left-back curled a magnificent shot past Jens Lehmann to seal one of the tournament's most iconic moments and decide a truly great game. Five days later, Grosso had the guts to take – and score – the crucial last penalty which sealed shootout victory against France in the final.

His overall performances during the tournament were excellent, and he was considered a surprise revelation at the age of 28. Bizarrely, Grosso played in lower divisions until he was 23, and then went relatively unnoticed at Perugia and Palermo. He joined Inter after the World Cup, but that move didn't work out and Grosso suffered poor spells at Lyon and Juventus too.

His club career was a relative failure. For the national team he was a colossus, though, and enjoyed a magnificent Euro 2008 after the World Cup.

Who is the most-capped Sweden player of all time? If you're not a Swede yourself, the chances are you'd be putting your money on Zlatan Ibrahimovic. But he's not even close. Instead, the lesser-heralded Svensson represented his country 148 times from 1999 to 2013. The intelligent and dedicated midfielder scored 21 goals, including the phenomenal free-kick that helped to eliminate heavy favourites Argentina in the 2002 World Cup group stage.

Overall, Svensson represented Sweden at two World Cups and three European Championships. He had the talent and character to play in a top league too, but eventually spent just four low-key seasons at Southampton and spent the rest of his career at his beloved Elfsborg. Even there, he only won two championship titles.

Gyan is one of Ghana's all-time greats. He's the top scorer in national team history with 51 strikes in 107 matches, and it's appropriate to mention him in the same breath as Tony Yeboah and Abedi Pele. Granted, the striker missed that famous penalty against Uruguay in the 2010 World Cup quarter-finals, but he also scored three goals in the tournament and his record in major competitions is superb.

Gyan also netted against both Germany and Portugal as Ghana failed to get out of their group at the 2014 World Cup. At club level, however, Gyan had modest spells at Udinese, Rennes and Sunderland, then wasted his career in the Emirates and China. As far as European football is concerned, his legacy is poor.

It's hard not to put another Chilean on the list, because Isla had the potential to become one of the world's top players in his position. The now-30-year-old showed outstanding promise as a right-back and right-sided midfielder for Udinese at the beginning of his career, and the national team enjoyed his services. Isla has 102 caps, was prominent at two World Cup tournaments and – just like Vargas – crucial to their historic Copa America titles in 2015 and 2016.

His club career went downhill after he left Udinese in 2012, however. Isla was a bench-warmer at Juventus, was relegated with QPR, and wasn't popular at Marseille either. He's now at Fenerbahce after a mediocre season at Cagliari; a sad state of affairs for a player who had so much potential.

Romero has been a substitute goalkeeper at his clubs since 2013 – first Monaco, then Sampdoria, and now at Manchester United. But during that period, he has also reached three major finals with Argentina – the World Cup in 2014, and Copas America in 2015 and 2016 – losing all of them, even though he conceded just one goal in 360 minutes of play.

In short, Romero is a fine custodian who for some reason has played more games for his country than his clubs for half a decade now. Strange.

QUIZ Can you name the 50 players with the most Manchester United appearances under Alex Ferguson?

LONG READ On the hunt for Diego Maradona in Mexico: a thrilling journey to the other side of the world