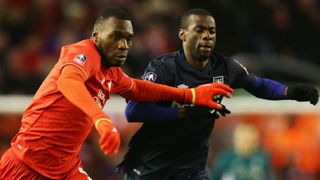 Liverpool failed to beat West Ham for a third time this season as Jurgen Klopp's much-changed side were held to a goalless draw at Anfield in the fourth round of the FA Cup.

Klopp's concerns over fixture congestion for his League Cup finalists have been well documented but, as in the third-round tie against Exeter City, fielding a weakened XI against West Ham contributed towards an extra match being added to their busy schedule.

Goalkeeper Simon Mignolet was the only player to remain from Tuesday's League Cup semi-final triumph over Stoke City but Klopp's youthful line-up were not short of fluency in their play – thanks largely to an impressive performance from Cameron Brannagan.

The 19-year-old midfielder showcased an accomplished range of passing and almost broke the deadlock with a stinging strike before the break, after Dimitri Payet speculatively struck the post for West Ham early in the contest.

Under-fire Liverpool striker Christian Benteke again displayed a lack of form and confidence after the break, with the Belgian and Joao Teixeira frustrated by Darren Randolph - the West Ham goalkeeper who started due to regular number one Adrian attending the birth of his first child.

Randolph's heroics meant Liverpool were once again unable to find a way past Slaven Bilic's team, who boast 3-0 and 2-0 Premier League wins over them this season ahead of the Upton Park replay.

Payet curled a free-kick against the outside of the far post from the right flank in the 10th minute and Liverpool endured a further scare when Enner Valencia - fresh from his brace against Manchester City - misjudged a header from Aaron Creswell's left-wing centre.

Benteke twice attacked Brannagan set plays and found Randolph plunging at his feet when he got on the end of Teixeira's 25th-minute throughball.

Jelavic and Winston Reid were unable to force home another fine Payet set-piece delivery five minutes after half-time, when Liverpool centre-back Steven Caulker was a touch fortunate not to be punished for handball amid the penalty box scramble.

Liverpool right-back Nathaniel Clyne was enjoying an enterprising second-half when he cut a pass across the box for Allen, who skied wastefully over.

Teixeira forced Randolph to push a powerful shot behind at his near post in the 63rd minute and Benteke horribly miskicked from close range as the hosts cranked up the pressure. Randolph was equal to Teixeira once more when Jordon Ibe coolly picked out his team-mate in the area.

The Republic of Ireland international then heightened Benteke's woes with a sharp double stop in the 74th minute.

Caulker was forced into a last-ditch block to thwart West Ham substitute Michail Antonio three minutes from time, ensuring Klopp must rouse his troops once more in the replay.