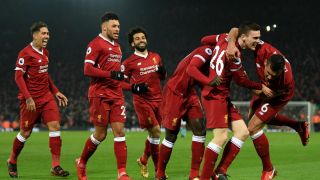 Anfield has long provoked a sense of dread for City, who last won at the Merseyside ground in May 2003, and they collapsed under an unsustainable weight of individual errors as Liverpool ran amok after half-time.

Alex Oxlade-Chamberlain produced a midfield performance to thrill the Liverpool faithful in the wake of Philippe Coutinho's departure to Barcelona and opened the scoring with an excellent ninth-minute opener on an afternoon of high-class finishing.

Leroy Sane thrashed a shot beyond Loris Karius at the near post to draw City level five minutes before half-time and Jurgen Klopp's choice of goalkeeper might have come in for greater scrutiny had the three attacking stars Coutinho left behind not sparkled at the other end.

Roberto Firmino's 10th Premier League goal of the season arrived courtesy of a deft finish in the 59th minute and Sadio Mane added a third 126 seconds later, having found time to hit the post in between.

City were a mess as Mohamed Salah completed a dizzying spell of three goals in nine minutes and, although Bernardo Silva and Ilkay Gundogan set up a grandstand finish, Liverpool deservedly inflicted a first defeat upon Pep Guardiola's side in 23 top-flight games this season.