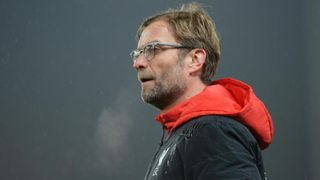 Liverpool manager Jurgen Klopp was proud of his players after their 1-0 League Cup semi-final first-leg victory over Stoke City, but rued further injuries to Philippe Coutinho and Dejan Lovren.

The duo suffered hamstring problems in the first half of the Britannia Stadium clash, which was settled by a cool finish by substitute Jordon Ibe.

Klopp was thrilled with the performance and result, with his only negatives being the double injury blow and Liverpool's inability to take more than a one-goal advantage back to Anfield for the second leg on January 26.

"It is a strange feeling," he told Sky Sports. "I am proud as it was a perfect reaction from the last game.

"You saw it was a special game, a good game – lively, aggressive, but of course we have two bad injuries.

"We now have three injured centre-halves and the only fit one [Kolo Toure] got a cramp in the last minute.

"The only thing we can criticise is our finishing again. We had a good structure, played football good, everything was good but we don't make enough goals.

"The biggest problem for us is we have two and maybe three injured players again."

Liverpool have injuries all over the pitch, with Toure now the only fit central defender, Christian Benteke the only recognised senior striker who is not on the sidelines and Coutinho now joining Jordan Henderson on the list of injured midfielders.

"It is very frustrating. The problem is we had too much injuries, when the players come back others are injured. It is a cycle that we need to come out of," Klopp added to BBC Sport.

"We have no break, no recovery. Players who never had a problem, had no problems in pre-season are fine, but for all other players it is up and down."

Liverpool's injury-hit squad are back in action on Friday when they travel to play League Two side Exeter City in the FA Cup.