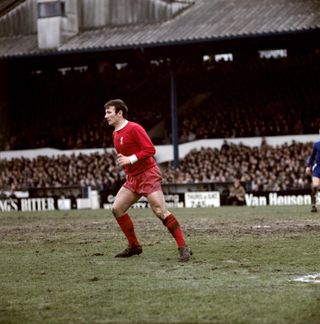 Liverpool owe Tommy Smith a “debt of gratitude” after his death at the age of 74, according to former team-mate Phil Thompson.

The Anfield club announced Smith – a multiple trophy winner during his time with them – had died on Friday night.

Smith earned the nickname of the ‘Anfield Iron’ due to his uncompromising style as a defender for his hometown club.

Despite that reputation, Smith was only sent off once in his 638 appearances for Liverpool which came between 1960 and 1978 and saw him win four league titles, the European Cup, two FA Cups and two UEFA Cups.

And Thompson, who revered Smith from the terraces before playing alongside him, believes the club owe Smith a huge amount.

“I loved him from the Kop because of his passion, commitment and never-say-die attitude,” Thompson told Sky Sports. “And then to go play alongside him, rub shoulders with him, go into battles with him, he was iconic. He wanted and desired the points every week.

“He was an incredible figure who helped me out enormously. To go from being a fan to play with him… he never gave up. Liverpool Football Club owe this guy a debt of gratitude.

“Tommy was the epitome of what Bill Shankly demanded. He drove the team, he was incredible. Who will forget his headed goal that won the 1977 European Cup final? The fella drove us on.

“This is a heartbreaking moment. He wanted success so much it took over his whole life.”

Ex-Liverpool player and manager Kenny Dalglish added: “He was a great advert for Liverpool Football Club, the way he conducted himself. His memories will be there forever.”

“Tommy was a fantastic servant to Liverpool Football Club. He left just after I came when I came down in 1977… he was an integral part of the dressing room and looked after me, helping me settle in.”

Smith helped Liverpool win the first of their five European Cups in 1977, heading the crucial goal as they beat Borussia Monchengladbach in Rome under the management of Bob Paisley.

His place in club history was long assured before that, though, having been a part of the first Liverpool side to win the FA Cup in 1965.

A winner of one England cap, Smith ended his career with Swansea after a spell in America.

Smith would later go on to suffer from Alzheimer’s disease and dementia and is survived by daughter Janette, son Darren and four grandchildren.

“The thoughts of everyone at Liverpool Football Club are with Tommy’s family and many friends,” a statement read.

“I was on my way to see him when he passed a couple of minutes before I arrived. Dad was only in here since the end of January and prior to that had been living in a care and sheltered accommodation complex for three years in Maghull.

“He had been growing increasingly frail and suffering from a variety of ailments over the last three months especially. We are obviously all devastated.”

The venue paid its own tribute, saying Smith ticked the boxes of the city’s unique selling points, football and music.