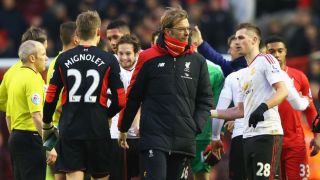 Former Liverpool captain Steven Gerrard said it is important Jurgen Klopp is given time to build his own team at the Premier League club.

The German manager has been in charge of Liverpool since October but has failed to drastically improve the club's indifferent league form.

Since arriving in the Premier League, Klopp has picked up 19 out of a possible 42 points, with the club sitting in ninth position in the league table.

Wins against Chelsea and Manchester City, as well as a promising 3-3 draw against Arsenal have given Liverpool supporters moments of joy, but these have been set back by losses to Crystal Palace, Newcastle United and most recently against rivals Manchester United.

But Gerrard, who has spent time training with the Merseyside-based club in recent months, believes Klopp needs to be given time to make the Liverpool squad his own.

The former England international, who now plays in the MLS with Los Angeles Galaxy, told reporters on MLS media day that it was too early to pass judgment on the German.

"I think we need to give Klopp a couple of transfer windows and more time and maybe a full preseason with the team to get used to each other and get his stamp on the way he wants to play and his tactics," he said.

"I think it's patience at Liverpool, but I'm very confident that Jurgen Klopp can improve things and bring success to the club because he's a fantastic manager.

"It's a results business. They need to prove that they belong in the top four by playing well and finding consistency.

"Liverpool, it's very difficult for them to compete with Manchester City and Chelsea, but that's the same for 90 percent of the clubs around the world because some people and owners are a lot richer than others.

"That's just the way of life. I don't think it has a huge effect because Liverpool have got fantastic players, a good team, a good manager.

"There's no excuses. You've got to go on and compete with the best. That's just the way it is at Liverpool. The expectations are high."