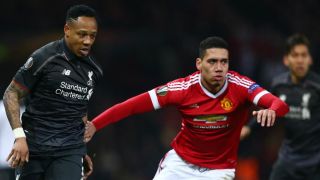 Chris Smalling believes Manchester United had Liverpool on the brink of collapse in the Europa League at Old Trafford on Thursday.

Anthony Martial's penalty put Louis van Gaal's men in front in the second leg of the last-16 tie, but an impressive equaliser from Philippe Coutinho ensured the match finished level at 1-1, sending the visitors through 3-1 on aggregate.

Smalling accepts United had left themselves too much to do after losing the first leg 2-0 at Anfield but feels Liverpool were on the ropes prior to Coutinho's pivotal strike on the stroke of half-time.

"We believed that, if we started well, we could put them under pressure," the defender told MUTV.

"You could see that they started to crumble but it was unfortunate we conceded just before half-time because we had a real battle on our hands.

"The damage was done in the first leg. We all knew we gave ourselves far too much to do and we paid the price for that."

With the Europa League now gone, United remain alive in the FA Cup and still hope to seal a place in the Premier League's top four.

They sit sixth in the table with nine matches to play, four points adrift of rivals Manchester City in fourth ahead of Sunday's crunch derby at the Etihad Stadium.

Smalling added: "We are going to want to make sure we go into that international break on a high and the only way we can close the gap on the top four is by beating somebody who is already in there.

"It's our time to step up. There's still a lot to play for. We need to show that consistency in our performances and, if we can build on that first half, we give ourselves a chance in the league and in the FA Cup."