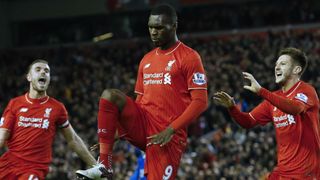 Klopp made 11 changes for the trip to St James Park, including three debutants, and his scratch side were twice forced to come from behind to salvage a 2-2 draw.

Liverpool head into this week's return on the back of a dispiriting 1-0 defeat to bitter rivals Manchester United that leaves them ninth in the Premier League table, eight points shy of the Champions League qualification places.

Cup success would appear to be a more realistic proposition for the Anfield club this season, with them holding a slender first-leg advantage over Stoke City in the League Cup semi-final and awaiting a last-32 clash against Augsburg in the Europa League.

In the initial tie, Klopp granted heavy priority to resting first-team regulars amid a crowded fixture list that ultimately became more congested thanks to equalisers from Jerome Sinclair and Brad Smith.

The former Borussia Dortmund coach may focus more heavily on experienced players this time around, while striker Christian Benteke is likely to face the fourth-tier team once more.

Liverpool's lack of cutting edge came under scrutiny after the United loss, and Klopp is keen for Liverpool to sharpen up both their finishing and final pass.

"Creating chances was good [against United], but the finishing was not good otherwise we would have scored a goal," he told a news conference.

"At this moment it is frustrating, how it should be, but we have to carry on and that’s what we’ll do.

With Daniel Sturridge's injury nightmare continuing and Divock Origi out due to a knee injury, recent loan signing Steven Caulker has been deployed as an emergency striker in his two substitute appearances.

As Dejan Lovren and Martin Skrtel continue their rehabilitation from hamstring problems, Caulker is more likely to enjoy a first Liverpool start in his customary position of centre-back.

Exeter enter the match in high spirits having come from behind to win a first League Two match since November on Saturday, 3-1 at Leyton Orient.

Jayden Stockley and Tom Nichols – who opened the scoring against Liverpool – were Exeter's matchwinners, while City's injury problems began to ease with Lee Holmes returning to action for the first time since scoring himself against Klopp's men.

"There were some bags of ice in the dressing room, but no more than normal," boss Paul Tisdale told Exeter's official website.

"Christian Ribeiro came through his first 90 minutes in a while, so well done him, while Lee Holmes, David Noble and Danny Butterfield are others who put a shift in after coming back.

"Having those players back will do us no harm on Wednesday."