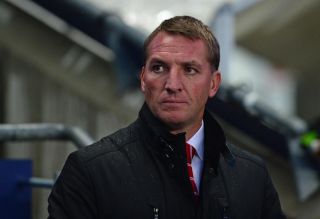 Despite controlling large periods of play in the first at the Etihad Stadium on Monday, Liverpool found themselves a goal down at the break as Stevan Jovetic opened his Premier League account for the season.

Liverpool continued to apply pressure, only for City scored twice more after the interval, with Jovetic and Sergio Aguero doing the damage.

A Pablo Zabaleta own goal, forced by Rickie Lambert's close-range header that was initially brilliantly saved by Joe Hart, offered scant consolation for the visitors.

Rodgers, though, was keen to take the positives despite having lost to the side who beat them to the title last season.

"I think up until the 40th minute we were the best team but we switched off in final period," he told Sky Sports. "We didn't defend it well enough and were 1-0 down.

"At 2-0 it is difficult for us, but to our credit we kept going.

"This is a difficult place to come, but we will continue to work, we'll get better, it just wasn't our night.

"There is no psychological blow, there is a long way to go. It was a tough game but we'll move on."

Rodgers will hope to unleash new signing Mario Balotelli to improve their play in attack, but does have concerns over the fitness of Glen Johnson and Alberto Moreno who both picked up knocks late on.

"Glen pulled his thigh, so we will assess that tomorrow," he added. "Moreno twisted his ankle so need to see how that is, there is swelling now but we'll see how it is in the morning."