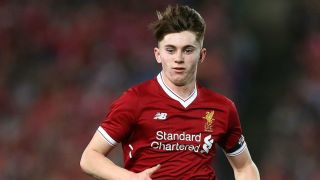 Liverpool youngster Ben Woodburn insists he was never tempted to consider switching his international allegiance from Wales to England.

Woodburn, 17, got his first senior call-up in March but did not earn a cap when Wales drew 0-0 with Republic of Ireland.

But the attacker has been included for the country's training squad in Portugal as they prepare for next month's World Cup qualifier away to Serbia.

And Woodburn, who made five Premier League appearances for Liverpool this season, stresses he was never tempted to represent England, despite their reported approach.

"I like it there, I love playing for Wales and I don't want to be anywhere else," he told the Liverpool Echo.

"My mum's dad is Welsh and ever since I started with Wales they have been great to me.

"I knew all the lads there and the coaches make it so welcoming. Ever since then I have wanted to play for Wales."

Woodburn paid tribute to the influence Liverpool boss Jurgen Klopp has had on his early career and is keen to make more of a mark next season.

He continued: "Jurgen has been a great manager for me. He has helped me during my first year with the first team and given me chances.

"He has taught me a lot – both in terms of when we are in possession and when we're not.

"He has kept my feet on the ground. I couldn't have asked for a better manager to start my career with.

"Now it is down to me to push on next season, build on this year and show everyone what I can do."