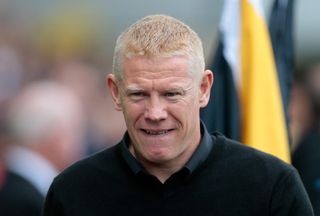 Gary Holt hailed Livingston as “exceptional” as they eased aside high-flying Motherwell to register a fifth successive home victory in the Ladbrokes Premiership.

Aaron Taylor-Sinclair’s second-half header separated the teams but the Lions were the better side from start to finish against an out-of-sorts Motherwell.

Livingston boss Holt admits he was relieved that his side got what they deserved after the break following a dominant first-half display.

He said: “We were exceptional against a very good side, the way we dominated, our movement.

“I said to them at half-time, we’ve all been in dressing rooms where we’ve had a pat on the back and a ‘well done’, then you go out there and come back in with regrets.

“They [Motherwell] are a good side, they’re third in the table – I knew Robbo [manager Stephen Robinson] wouldn’t be happy.

“We were dictating the game, getting chance after chance, so expect a backlash and be at it from first whistle to last again. And we were.”

Holt and assistant David Martindale were both booked during a feisty second half for complaining about referee John Beaton’s decision-making.

The Steelmen almost snatched a point with a Peter Hartley shot that hit the post in added time.

But, with Celtic the visitors on Wednesday, the Fir Park manager is confident his team will bounce back.

He said: “We had 10 players off. We didn’t turn up and were unrecognisable today.

“We couldn’t pass ball. They outran us and outfought us. You need to do the basics if you want to stay third in the league.

“We deserved absolutely nothing from the game. If we had equalised at the end it would have been a travesty.

“It is very rare when you have so many players off. Only Mark kept us in the game with four or five great saves.

“I tried to change it at half-time but even the changes I made went wrong.

“We’ll put it in a box but we’ll have to be better for Wednesday night if we’re going to remain where we are.

“We know we have to have an improved performance or we’ll be in trouble against Celtic. We will do. I’m confident in the players.”