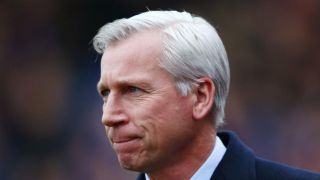 Alan Pardew says the performance of Hugo Lloris and a couple of "special moments" cost Crystal Palace in Saturday's 3-1 defeat to Tottenham.

Jan Vertonghen's own goal on the half-hour mark put Palace ahead at Selhurst Park, but Harry Kane levelled in the second half with his fifth goal in his past seven Premier League outings.

A stunning individual strike from the impressive Dele Alli then put the visitors ahead with six minutes remaining before Nacer Chadli completed the comeback deep in injury time.

"We wouldn't have lost the game if it hadn't been for their goalkeeper. At 1-1 he made two great saves and it was just not our day," he told BBC Sport.

"Wilfried Zaha was a problem for them and on another day we could've won this game.

"We haven't done much wrong, but they have great individual talent and they won it with a couple of special moments."

Alli stole the headlines with one of the best goals of the season, controlling Christian Eriksen's header before casually flicking the ball over Mile Jedinak and firing an unstoppable volley past Wayne Hennessey.

And Pardew says it was a "horrible" moment watching such a quality effort.

"It was horrible to watch, and I don't often say that about a beautiful goal," he added.

"As soon as he flicked the ball over his head I feared the worst. It was a great moment for him and he is a great talent."