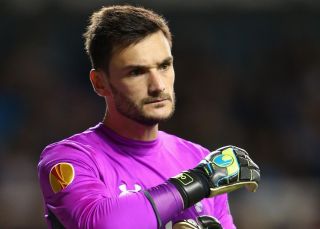 Besiktas made a bright start at White Hart Lane and hit the woodwork through Demba Ba, before Harry Kane rifled in his fourth goal of the season in the 27th minute.

After that, Lloris produced three stunning saves - two from Olcay Sahan and one from Ba - as Spurs appeared to be heading for victory, but Vlad Chiriches' handball afforded Ba the chance to equalise from the spot in the 89th minute.

The former West Ham, Newcastle United and Chelsea forward coolly converted his penalty, and Lloris felt a point apiece was a fair result.

"It was a tough game against a big team and I think the draw maybe both teams deserved," he told ITV.

"It's football. Sometimes you don't play a great game but you have to know how to win the game. We were close but we conceded the penalty.

"It's a good thing to learn now and we have to be focused on the rest and it's a big game on Sunday [against Southampton]."

Kane, who is yet to start in the Premier League this season, has displayed good form in the cup competitions but the over-riding feeling for the 21-year-old was one of disappointment.

"We wanted to come away with a win," he said. "To concede that late is very disappointing, we wanted to take forward momentum and it's unfortunate we couldn't hang on in the end.

"It's always great to get on the scoresheet but we come away disappointed. That's football, the lads played well, we've got to move on."

Discussing his own lack of league action, Kane added: "It's competition for places. That's what you want, that's what the manager wants and whenever I get chance I want to try and impress and fortunately I was able to do that today."