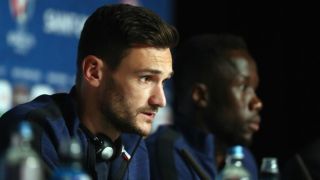 France captain Hugo Lloris believes his team's run to the Euro 2016 final has helped to provide an escape for his nation during times of turbulence and tragedy.

Lloris and his team-mates face Portugal on Sunday at the Stade de France - a venue that was targeted during their 2-0 friendly win over Germany in November as part of coordinated terrorist assaults that killed 130 people in the French capital.

While the world came together in grief to support France at the time, a state of emergency has remained in the country throughout Euro 2016, with armed police a visible presence.

New labour laws in the country have led to ongoing industrial disputes and strike action, while France is primed for what could be a bitter presidential election next year.

Amid such disquiet, Lloris has marvelled at the way supporters have united behind Didier Deschamps' team on their road to Sunday's final against Portugal.

"Of course we've had some very tough times this year, both with those tragic events but also with events that have gone on off the field," he told a pre-match news conference in Saint-Denis.

"But we're even prouder to be on the pitch to feel the entire French population behind us, to feel this happiness which is shared between the players and the French people.

"That gives us strength and is lovely to see. But we still have that final step to take to finish this competition in the best possible fashion.

"The French people really needed to escape via this competition, and sport has this strength: to unite people. We are currently experiencing that. But we still have one step to take, the hardest one, but one that's worth it.”

France are on the cusp of glory six years on from a World Cup campaign in South Africa that ended in ignominy.

Led by then-captain Patrice Evra, the players refused to take part in a training session after controversial striker Nicolas Anelka was expelled from the squad following a row with coach Raymond Domenech.

They crashed out, winless in the group stage, and Bacary Sagna - a survivor from that low ebb along with Lloris and Evra - believes his team-mates have gone some way to restoring France's football reputation over the past four weeks.

"It clearly left its mark on French football," he said. "Clearly we made mistakes. It wasn't nice because we brought French football into disrepute and gave a very negative image of the game in this country.

"We had to go back to basics after that and try and win the public around to us again. We've put in a lot of work in the six years since and we want to put a smile on the French people's face.

"We want to show another image of the French national team. We can't erase the past, but we look forward.”

Lloris added: "We went through a crisis in French football, but we've picked ourselves up from that crisis now. It wasn't easy but, step by step, we've been able to go through that process.

"The FFF deserve a lot of praise, as do the players and the coaches. It takes time. You can't simply buy success and experience.

"But now we have an opportunity to make history. It's a unique opportunity in a player's career."