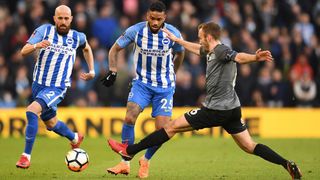 Connor Goldson headed in a second before Leonardo Ulloa sealed the hosts' passage to the quarter-finals with the first goal of his second stint at the Amex Stadium.

Jonson Clarke-Harris grabbed a late consolation for the League Two side, but the loss of a clean sheet was not enough to overshadow Locadia's eye-catching contribution.

"Yes it was great to see him score, but getting 70-75 minutes was more important," Hughton told the BBC.

"He is looking fitter, and he has come into a good group, a competitive group, and it is nice to think that he does not feel the pressure."

In addition to reaching the FA Cup's final eight for the first time since 1986, Brighton are now unbeaten in their last four competitive matches.

And with Ulloa also integrating quickly, the Premier League's fourth-lowest scorers appear to have found reliable support for Glenn Murray.

"Leo's goal is what he can do - he is a target man and wants to get into the box," Hughton added in his post-match press conference.

"He is the type of striker that if you provide a service for him, he will have opportunities to score."