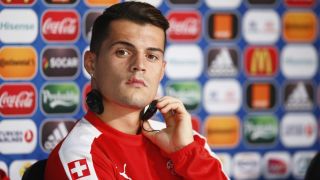 The Switzerland international, who was one of his country's standout performers at Euro 2016, completed a move to Emirates Stadium in May for a fee reported to be close to £35million.

Arsenal are lighter on numbers in central midfield despite Xhaka's arrival, with Mathieu Flamini, Tomas Rosicky and Mikel Arteta having all left the club at the end of last season.

But Wenger is confident the return to fitness of Santi Cazorla, Francis Coquelin and Jack Wilshere – plus the all-round qualities of Xhaka – will give his side a strong spine for the start of the campaign.

"He brings passing ability to play through the lines from deep positions, his work rate, and he's good in the air," Wenger told Arsenal player of Xhaka.

"We lost three midfielders: Flamini, Rosicky and Arteta, and numbers-wise we are quite solid in midfield now.

"[Mohamed] Elneny had a big impact when he came here, Coquelin was injured for a long time and is back. Cazorla will come back, Wilshere is back… so we are solid in midfield."