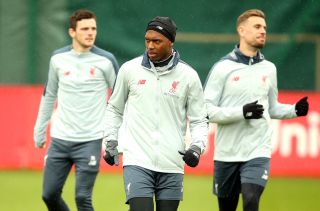 Defender Dejan Lovren and midfielder Alex Oxlade-Chamberlain were absent from Liverpool’s training session ahead of their Champions League quarter-final second leg in Porto.

However, captain Jordan Henderson – forced off in Sunday’s 2-0 win over Chelsea with an ankle problem – was able to join his team-mates on Tuesday at Melwood.

Lovren, who played in last week’s 2-0 first-leg victory, would have been in contention for another start at the Estadio do Dragao, although he may yet travel with the squad when they fly out to Portugal later in the day.

Oxlade-Chamberlain has been training with the first team regularly now since coming back from serious knee injury sustained a year ago but, although he played for the under-23s at the weekend, he is not expected to be involved against Porto.