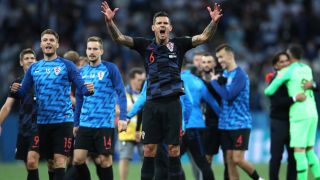 Croatia defender Dejan Lovren believes his team can better the achievements of the 1998 outfit, who finished third in France.

Ante Rebic, Luka Modric and Ivan Rakitic were on the scoresheet as Croatia moved into the last 16 for the first time since 1998, when Golden Boot winner Davor Suker inspired a run to third place.

But Lovren feels the current outfit are a better team, and the Liverpool defender hopes they can better the run of 20 years ago.

"I think we have better players than that team."

Croatia only need a point against Iceland Tuesday to seal top spot in the group, a result which would see them likely avoid France in the last 16.

Despite several powerhouses struggling early at the showpiece event, Lovren said his team were still outsiders.

"There are no easy games. Germany are still here, Spain, France. We are the underdogs and that helps us," he said.

"How we played today will give us a boost for the next couple of games and hopefully we can just stay fit for the rest of the tournament."