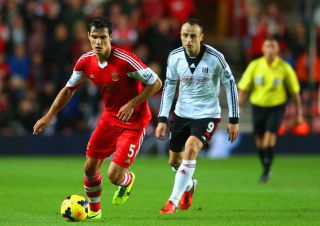 The former Argentina international took over at the club midway through last term and has since guided Southampton to fifth in the league.

Lovren, who arrived at the club from Lyon in June, has played every minute of Southampton's domestic campaign - contributing to a defence that has conceded just three goals in the league this season.

While the Croatia international has been taken aback by Pochettino's preference for a high defensive line, he believes it is working perfectly.

"He (Pochettino) gives us a lot of advice, he's an intelligent man so we follow his instructions," Lovren told Sportske Novosti.

"We keep the line very high, I've never played like this before and it's a level with risk. But we're doing a good job."

"Our philosophy is to get the ball back very quickly when we lose it. I think you saw that (in Saturday's 2-0 win) against Fulham, we lost the ball in the first half and they didn't have a chance to do anything.

"I think it was amazing, this was the best game we've played."

Southampton have lost just once in the league this season and face Sunderland in the fourth round of the League Cup on November 6.

After that, they travel to Hull City before taking on Arsenal and Chelsea away from home, with Lovren backing his team-mates to keep improving ahead of what he believes will be tough fixtures.

"For now, everything is perfect but we still want to improve each day," he continued.

"I'm very proud of the team, we're young and we've already shown the character - but the next few games will be a big test for us."