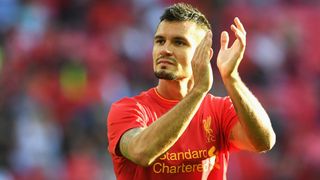 Dejan Lovren has returned to the Croatia squad for the World Cup qualifier against Turkey in September.

The Liverpool centre-back was omitted from the Euro 2016 squad after falling out with head coach Ante Cacic, amid reports that he demanded guarantees over his place in the first team.

Cacic made it clear he would not tolerate any ill discipline in his squad, but stated prior to the tournament in France: "I haven't closed the door on Lovren for good. He can return one day if he realises that he has to be a team player."

Lovren has now been included in the 23-man squad for the clash with Turkey, a side they beat 1-0 during the group stages, at Maksimir Stadium on September 5.

Alen Halilovic, who left Barcelona for Hamburg in July, has been left out.

The game will take place behind closed doors, as part of a FIFA sanction issued against the Croatia Football Federation (HNS) for repeated incidents of racist and discriminatory chanting on the part of supporters.

"I wish all players to stay healthy until the Turkey match," Cacic told the Croatian Football Federation website. "We know Turkey very well, they are strong, and it is big disadvantage for us to play with no fans [due to the stadium ban]."