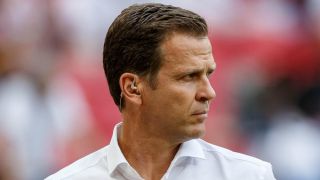 Oliver Bierhoff described Germany's management team as "part of the problem" as he admitted his shared responsibility with head coach Joachim Low to address the national team's shortcomings.

In the aftermath of Germany being knocked out in the first round of a World Cup for the first time for 80 years, Low re-stated his commitment to remaining in charge and general manager Bierhoff backed the 58-year-old as the man to turn their fortunes around.

To do that, Bierhoff says the duo must begin their analysis of a hugely disappointing campaign in Russia with themselves.

"We are also part of the problem, we have to first start with us," Bierhoff told Welt.de.

"We have the responsibility, must accept criticism, we are convinced that we can do it."

"I still feel a huge sense of disappointment, but I am fully committed to leading us through this rebuilding phase" - Joachim is staying on as head coach July 3, 2018

Bierhoff revealed that discussions between himself and Low about the way forward for a team facing severe media scrutiny in Germany had already begun.

The former AC Milan striker, who scored 37 goals in 70 appearances for his country, was appointed to the position of team manager in 2004, when Jurgen Klinsmann took over as head coach, and he was part of Low's staff when Germany won the World Cup in 2014.

"It was important to me to discuss in person where we were going," said Bierhoff.

"We both have the energy to tackle it."