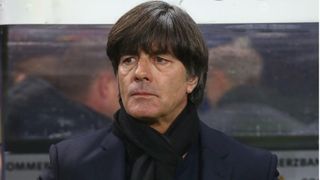 Having claimed glory in 2014, Germany sailed through qualification for the 2018 finals, while a youthful squad gave evidence of the nation's strength in depth with victory in the Confederations Cup in July.

But Low is under no illusions as to how tough it will be for Die Mannschaft to repeat their triumph in Russia next year, insisting there will be no room for error in their performances.

"In 2014, we weren't in the focus too much," Low said. "We played ourselves into the tournament as a team and constantly improved.

"Now we're world champions, the reigning Confederations Cup champions, the number-one ranked team in the world. We're the only team that almost has to get worse.

"Everyone will be highly motivated to play us. To repeat such a performance is incredibly difficult – we have to have an unbelievably strong squad where every player is in top shape every minute of every day.

"The Brazilians have recovered brilliantly from the 7-1 defeat and are better now. Argentina have unbelievable attacking quality, Spain are like they were before, and I also wouldn't forget England, as well as France."

Low selected a much-changed squad for the Confederations Cup, with a number of Germany's key stars absent as the fringe players were handed the chance to impress.

One player who sat out was Manuel Neuer, who picked up a broken foot early on in 2017-18 that will keep him out of action until January at the earliest.

However, Low expects the Bayern Munich goalkeeper - whom he labelled as the world's best - to have made a full recovery in time for the showpiece tournament.

"When he returns to training in January, he'll have four months. He'll be in shape in time," Low continued.

"We would all be delighted; simply put he's the best goalkeeper in the world and has been a rock for us."