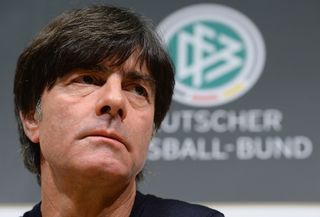 With qualification to the FIFA World Cup having been secured by Friday's 3-0 victory over Republic of Ireland, Germany have the chance to tinker with their starting XI for their final qualification game in Group C.

It means the likes of Mario Gotze, Mats Hummels and Julian Draxler will all push for a place in the line-up and attempt to stake their claim for a regular starting berth.

Germany also have two friendlies in November, against Italy and Chile, giving Low plenty of time to experiment with his side.

But Low will resist the temptation to make wholesale changes as Germany are focused on earning their ninth victory of the group in Solna.

"It's not going to be eight positions because it's important that we maintain a certain rhythm now, but I think I will test in the next three games - Tuesday and the two in November," he said.

"We have won eight out of nine and now we want to win the 10th game so we do have motivation.

"We know he's not ready for a full 90 minutes as he's had very little match practice and rarely played 90 minutes in recent months."

Sweden will be without suspended forward Zlatan Ibrahimovic for the fixture, but Low believes that could work out better in the long term for Erik Hamren's side, who are likely to secure a play-off berth by virtue of being one of the eight best runners-up.

He continued: "I think it's good for Sweden that he's not suspended in the play-offs as Sweden do benefit a lot from him and he's an eminently important player for them.

"Maybe they're not so unhappy that he's not playing now, but that he's back for the play-off."