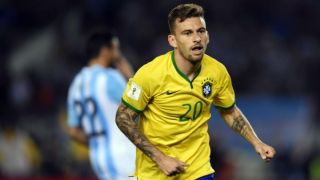 Santos and Brazil international midfielder Lucas Lima says he turned down the chance to earn £200,000 a month from a Chinese team in order to keep his dream of playing in Europe alive.

Lima has been linked with Italian side Torino and Portuguese giants Porto but was the subject of strong interest from China, with Jiangsu Suning and Shanghai SIPG touted as potential suitors.

Jadson, Renato Augusto and Gil – the latter two of whom are Brazil internationals – have swapped newly crowned Campeonato Brasileiro champions Corinthians for the Chinese Super League since the end of the season in December.

However, Lima was not interested in the money on offer in a transfer to Asia and hopes remaining with Santos will boost his chances of representing the national team and eventually featuring in Europe.

"It is a lot of money. I declined more than three million reais a month, nearly five (£850,000)," he told Esporte Interativo.

"I talked to my father and with my family. My father always says that money is not everything in life, it is also important to be happy.

"I'm not going to say that I do not want to have money, to be rich, because I'd be lying. But I made this choice for my happiness, which is playing football and the dream of playing for the Brazilian national team and Europe."